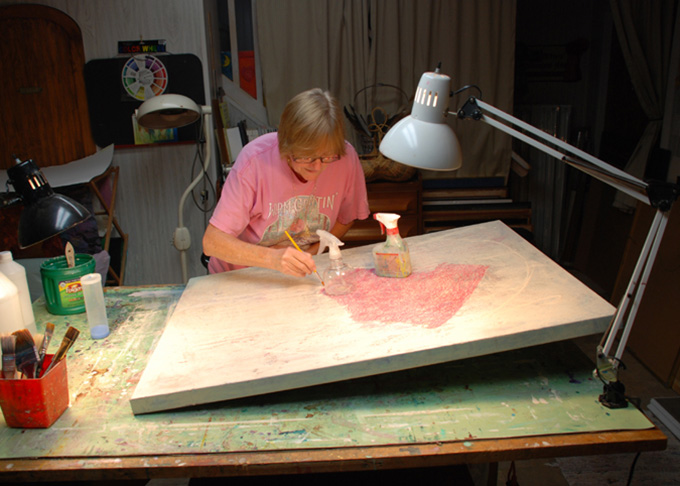 Deborah Rooks Garst ( known as Deb by her friends ) was born in Atlanta, Georgia and grew up in the community of Bluff Park on Shades Mountain near Birmingham , Alabama. After graduating from W.A. Berry High School  in 1972 and the University of Montevallo in 1976, she studied Art and Photography at the University of Alabama in Birmingham. Over the years she has also studied art and photography with nationally and internationally known artists including Carol Barnes, Miles Batt, Mary Todd Beam, Mary Ann Beckwith, Carrie Brown, Ernst Hass , Pat San Souci, Soon Bok Sellers, Michael Rivers, Cher Thompson, and Doug Walton. In 1999 she presented a 5 day art seminar at Central Alabama Community College on abstract techniques and collage. In 2004 she married Steve Garst and now resides in Blue Ridge , Alabama with Steve and her two furry art critics, Coqui, and Maui.
Deb, is a juried signature member of the International Society of Acrylic Painters awarded signature status in 2010, an award winning signature member of the International Society of Experimental Artists awarded signature status in 1999 and an award winning signature member of the Watercolor Society of Alabama, receiving a Patrons Award in 2017. She is also a juried member of the Georgia Watercolor Society, a juried member of the Southern Watercolor Society , member of  The Dixie Art Colony Foundation and a member of the Elmore County Art Guild. Deb and her husband were juried into the International Society of Acrylic Painters and awarded signature status, being the first husband and wife in the history of the organization to receive both of these honors at the same time.

Your ticket for the: About Deb